There’s been an interesting trend in recent exhibitions to mix contemporary and modern art with antiquities. The mid-January 2011 opening of the Museum of Old and New Art in Hobart, a museum with an eccentric mix of paintings, sculptures and video installations set among displays of Roman coins and Egyptian mummies, is a good example, but a more considered and less showy approach was seen in the recent Naked show at Andrew Jensen’s Sydney gallery in April. 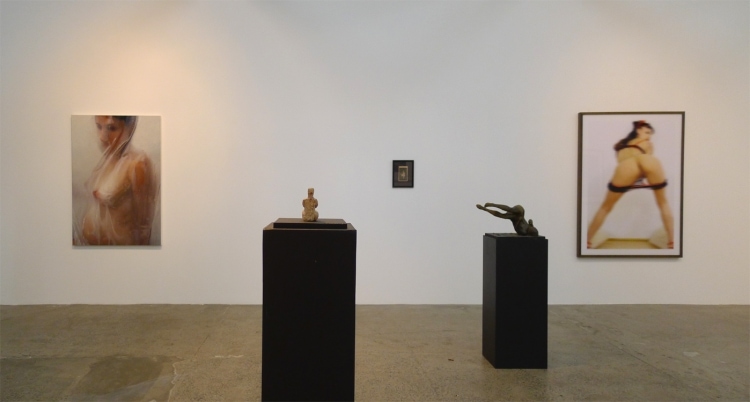 Next to works by Eric Fischl, Tracey Emin, Bill Henson and others, there was a mysterious object mounted atop a slender black column. Placed at eye-height, encased inside an acrylic box, was a Syrian Tel-Halif fertility figure. Possibly made of wood, or stone, hand carved and delicately painted, the tiny object was dated at 6,000 BC. While the curatorial intention of the inclusion of such an object was meant to draw a connection between the way nudity is represented in that contested zone between profanity and the sacred – and its form echoed in a drawing by Louise Bourgeois hung on an adjacent wall – I was simply astounded by the age of the thing; eight thousand years old.

Thinking of this little objects’ miraculous passage through the entire history of classical and western civilisation, somehow surviving to wind up there in a smart Paddington gallery for what felt like a very personal audience, was an unexpectedly profound experience. A black neighbourhood cat wandered into the gallery looking for attention and sauntered around the delicate stand, its tail tracing the edge of the plinth. In my mind’s eye I could see the whole thing toppling over, the case breaking and the fertility figure smashing to pieces as it hit the concrete, the cat squinting and licking its paws. So much for eternity.

The exhibition Awfully Wonderful: Science Fiction in Contemporary Art performed a similar curatorial trick by re-contextualising objects, but the objects included among the art works were far more ambiguous, and much harder to interpret. The artist Jo Law had collected together a number of antique scientific instruments and machines from the collection of the Powerhouse Museum including a 19th century Surveying Glass Circumferenetor and a Spectroscope, a 20th century Musical Automaton, a phonograph, a mid 1960s calculator and a ZX80 personal computer from 1980 – and placed them in glass boxes around the main room of the show. Law’s intention was to “demonstrate that scientific invention, once it falls from common and practical application, slips back into the realm of speculation…” Stripped of their specific purpose and everyday familiarity these objects were as strange and as aesthetically beautiful as any of the actual art works in the show. As to how they were to be then interpreted, and what that speculation might suggest, was one of the exhibitions many provocative questions.

Curated by Bec Dean and Lizzie Muller, Awfully Wonderful had a number of objectives: to exhibit art works that had a direct conceptual connection to ideas and themes in science fiction; to ask whether we can collectively imagine an optimistic future amongst all the post-millennial doom and gloom; and to propose a conundrum that speaks to the very essence of the art experience – can these collected objects [art and non-art alike] be considered speculative objects? In the interests of full disclosure I should mention at this point that I was one of a number of writers asked to contribute to the exhibition catalogue but as a visitor to the show I felt as fresh to the experience as any average punter wandering in from the adjacent theatres or weekend food markets. So what on planet Earth was all this about?

Science fiction is often mistaken to be a fiction purely of the future and one driven by a technological metaphor for human experience, featuring tropes like time travel, space exploration, the exotic and uncanny other. Brian Aldiss, that venerable historian of SF and often brilliant novelist, wrote that SF has been about three basic themes: the Unknown, Nature and Other Tribes. The costumes and locations might change, perhaps even the language, but the future as we imagine it more accurately reflects the past, and the vestigial memories of how we lived our lives rather than how we might one day. The most popular futuristic imaginings such as the Star Wars films beginning with its first incarnation in 1977 are prime examples of this inversion of history: there is an empire, an emperor, sword play, warring clans and cults, exotic strangeness lifted straight out of a fuzzy cultural memory of 19th century history paintings. That the characters fly from place to place in spaceships is of little import in the overall architecture of the Star Wars narrative – it’s as genuinely futuristic as Lord of The Rings. While it’s probably reductive to state that the future never arrives, that it’s always immanent and unformed, it also happens to be true – and so, if we cannot ever physically occupy a place beyond the present moment, then what does that say about that category of cultural imagining we call “the future”?

The collected works of Awfully Wonderful switched back and forth between the realist mode of SF and the more familiar metaphorical contextual reading of contemporary art. On the literalist-realist end of things were two video works – Philip Brophy’s The Sound of Milk (Prologue) [2004] and Ian Haig’s Chronicles of the New Human Organism [2009-10]. Both pieces delighted in the ironies of old SF and the inherent campiness of its visions, mixing antiquated futures with the not-so sublimated fears of contemporary society. At the other end of the scale, where didactic meaning dissolves into the handmade aesthetic of subjectivity, Deborah Kelly’s collage series Dream of a Common Language in the disintegrating circuit (with thanks to Donna Haraway) [2011] was a beautiful sequence of images created from images lifted from glossy fashion magazines, while Peter Yate’s Metropolis Robot, a version of Futura, the robot from Fritz Lang’s 1927 film Metropolis, held upright by balloons, was more charming than chilling. Installation sculptures and video works by Ms&Mr, David Haines and Joyce Hinterding, Sam Smith, and David Lawrey & Jaki Middleton elegantly charted the conflict between reading art as metaphor and its inherent material qualities – the thing remains the thing, but it speaks to us in a sublimated language of signifier and signified. But perhaps the most startling inclusions were the performance works that eschewed the trappings of generic contemporary art for the full glare of SF tropes: Adam Norton revived NASA imagery for his Mars Gravity Simulator – a complex set up of pulleys and counterweights that allowed the artist to walk at a right angle to the floor; and Hayden Fowler’s Anthropocene – a cross between a movie set and a zoological garden in which the artist enacted the future of man as a survivor lost in a mutated landscape.

Past visions of the future betray their own time, marked as they are by outmoded means of expression, yet science fiction’s greatest achievement is to provoke a profound sense of dislocation, or what theorists of SF have dubbed “cognitive estrangement”. For the curator’s of Awfully Wonderful to ask whether objects can be speculative is rather like asking if we can believe in the potency of metaphors. Our current time is marked by a general sense of estrangement from the real world – it’s too ugly, banal, or unremarkable, so we look to the fantastic for a release from day to day life. We trust in the idea that our metaphors, be they in visual art or elsewhere, might answer questions about why we’re here, and why we take time to create cultural objects that make a mystery of the known.

At the heart of art making is the idea that what is created offers a meaningful commentary on our experiences. Even for the most mundane and workmanlike piece of art, one that aspires to beauty or truth or some other majestic but ultimately subjective statement, there is always doubt. Has the artist got it right? Can we decode the language? Is it too obvious or too obscure? How does this experience sit with what we already know and believe about the world? The Brazilian artist Yara Flores captured the essence of our confusion between metaphor and reality beautifully when she wrote that “every technology is a metaphor. […] The difficult matter is to sort out whether this is a primary or secondary function. Which is to say, did we initially make this universe of instruments, machines, tools, and devices as a way of talking about our condition […] Or did it work the other way around? Did we set out to kill our neighbours, say, and then notice that the sword was a lovely way to say ‘violence’?”

One of the clichés of Western culture is that the meaning of a work of art should not be dulled by the passing of time. Great art survives the centuries. Perhaps the nuances of its original context have changed but its essential human qualities are the things that will make it continually relevant. Personally, I’m not sure if that’s true. One could reasonably argue that “great works of art” are in themselves a cultural category that exists to scaffold the intellectual traditions of the West. And when it comes to recognising the value of objects produced in other cultures, recognising their so-called “human qualities”, well, we have a pretty poor track record. If objects that miraculously survive the millennia like the Syrian Tel-Halif fertility figure have anything to tell us, it’s that the language of creating a human form is ancient and that sex and death are the only subjects that transcend culture and time. This was the argument that David Walsh and his collection at MONA has tried to run and my reaction to it wasn’t so much a sense of happy realisation that there are universal truths so much as a depressing feeling of pointlessness. Is that all that art can really talk about?

The short answer is no. Hell no. Art has many functions, from the ephemeral and useless, to the long-lasting and profound, the art object articulating its own time from a number of temporal viewpoints– as it was, as it is, and how it might be again – and from its material qualities to its associated value. Describing an idea of the future is a way to liberate the present, and with the recognition that the future is a reflection of the past, this category of imagination becomes genuinely futuristic. We live ourselves into the future one moment at a time. We have an emotional connection to the past and the heavy weight of history, but what’s done is done, and there’s no changing it.

View all posts by tezby

This site uses Akismet to reduce spam. Learn how your comment data is processed.